A few days ago a set of 47 1985 Phillies Tastykake cards arrived at my house, trapped in the same shrink wrap that has housed them for the last 24 years.  I believe these sets were a stadium giveaway at some point during the season. Tastykake and the Phillies teamed up for a set each year from 1982 through 1990.  Nowadays, they only team up to unleash commercials with the very catchy “Nothing goes better with Phillies baseball than Tastykake” song featuring the Phanatic and a giant butterscotch krimpet dancing around Citizens Bank Park.

When I set the cards free, I found a treasure trove of extreme close-ups.  I wonder what these guys were thinking about when these shots were taken? 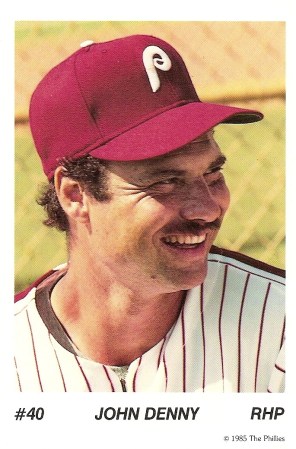 Jerry Koosman must have been joking around with Mike Schmidt about who has the more expensive rookie card.

The manager and coaches thought this picture had a chance to look somewhat natural.  Nope.

Schmidt obviously wanted to show off his guns.  Look at those forearms!

This is the only one of the six future Phillies cards to feature two players who would eventually stick in the majors.  Of the other 10 players featured, I only recognize the names Mike Maddux and Rich Surhoff, both of whom are part of the Phillies’ long history of picking the wrong brother. 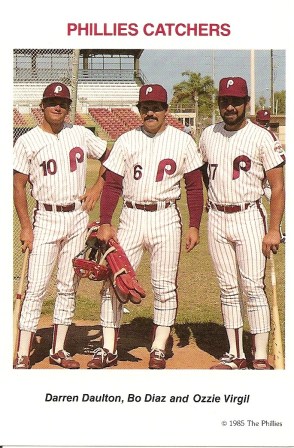 I really like this set, enough that I am thinking about purchasing another set to send out for TTMs.  The cards are huge and I think they would look great with a nice black sharpie.  One of my problems with TTM is that sometimes the card is too small for a good signature.  These definitely do not have that problem.  Check out Mike Schmidt next to Burrell’s 2009 OPC card:

The TTM project probably won’t happen for awhile, so now I just need a way to store these giant things.